The document is developed and is being sustained by the Information and Analysis Center for Positioning, Navigation and Timing (PNT IAC of the Central Research Institute of Machine Building), coordinated within and approved by the Russian Defense Ministry and the Roscosmos State Corporation. 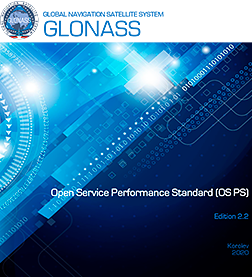 GLONASS OS PS serves as a high-level mainframe document specifying the values of the achieved GLONASS performance characteristics plus the significant guaranteed margin. These coupled with the signal reception environment and a priori estimation of user equipment (UE) performance characteristics can further be translated into end user performance which a user can expect to achieve while solving his specific navigation task. This GLONASS OS PS is a basis for GLONASS services certification, lower level UE and GLONASS-based services standards development, as well as for international standards development like those of International Civil Aviation Organization (ICAO) and International Maritime Organization (IMO) and others.

GLONASS OS PS specifies standards for the GLONASS OS Signal-in-Space (SIS) performance neglecting receiver biases, signal propagation and reception biases (in terms of performance metrics used to specify system performance that is taking into account the GLONASS space segment and the GLONASS ground segment contributions to the performance). This OS PS is a basis for certification of GLONASS services and GLONASS-based systems including the System of Differential Corrections and Monitoring (SDCM) and the System of Precise Orbit and Clock Determination (SPOCD), as well as UE for use in aviation and other domains.